In the 18th century, rising prosperity and social mobility meant shopping began to change from something done almost entirely out of necessity, to a leisure pursuit whereby luxury items and fripperies became objects of desire. As a consequence shop fronts around the mid-century became increasingly elaborate as they competed to turn shoppers' heads.

Surviving shop fronts from this mid-Georgian period are rare, which makes 56 Artillery Lane, London's best example, all the more remarkable. Its neighbour, number 58, is also noteworthy. This is number 56: 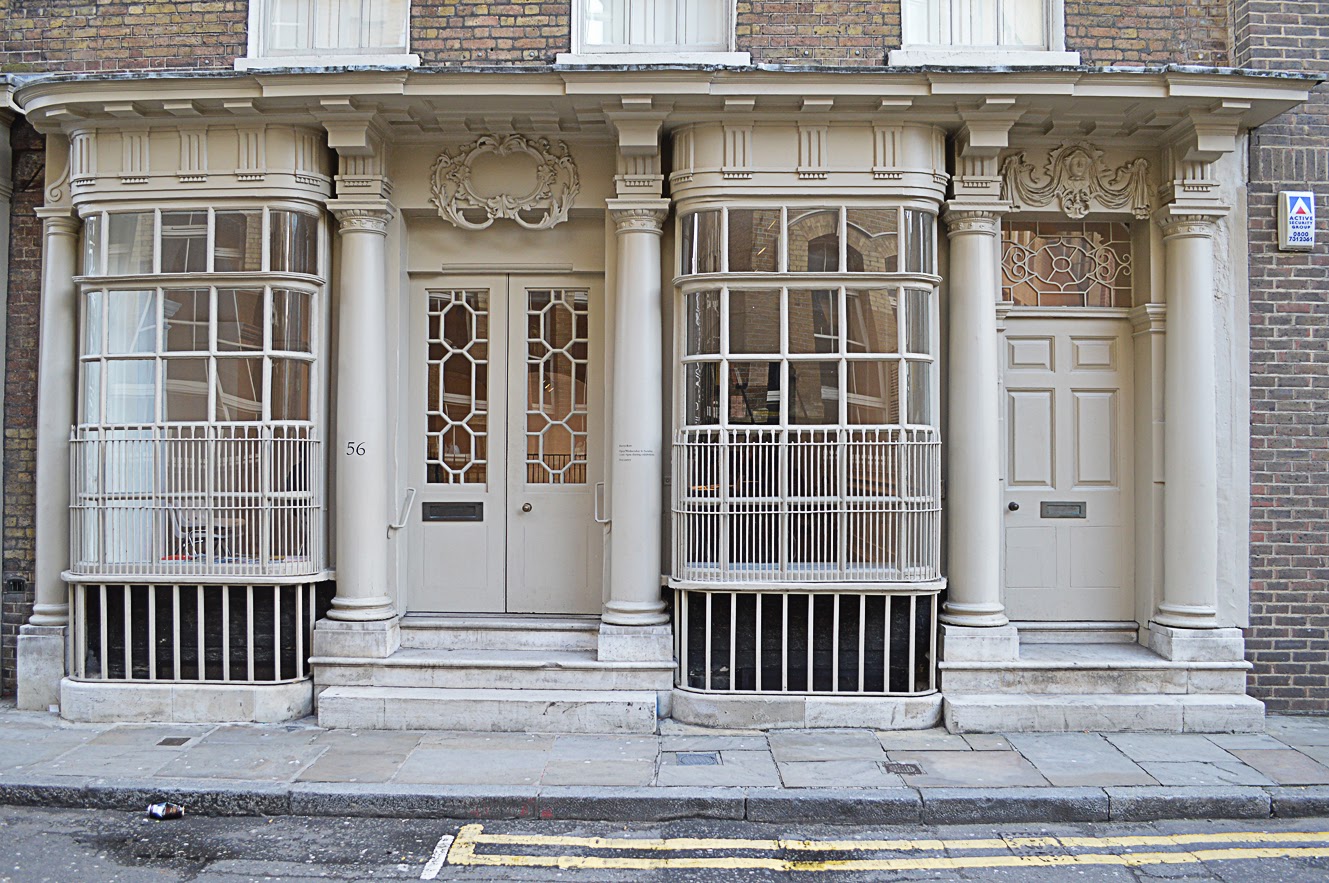 The building dates from 1690, but in the 1750s Huguenot silk merchants Nicholas Jourdain and Francis Rybot inserted two shop fronts on the ground floor, in a spectacular rococo style. Number 56 still dates from this time, but 58 was updated with a plain Regency-style front in 1827. 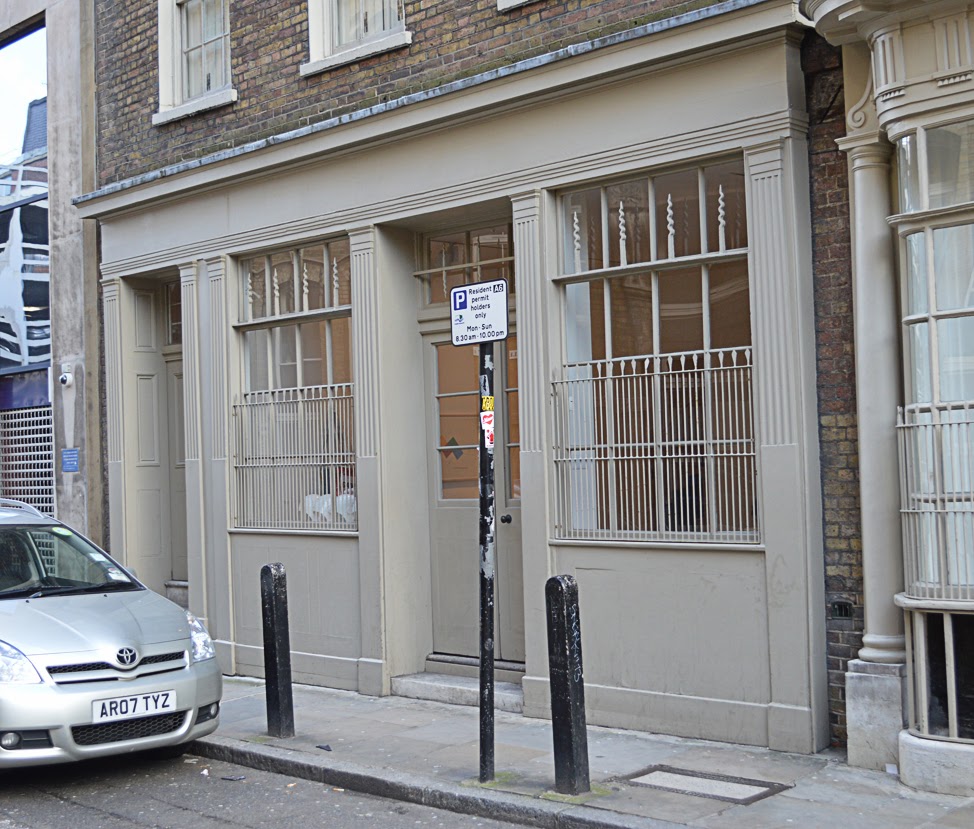 The shop front at 56 has five Doric columns (the one on the left smaller than the others) set on plain stone pedestals. These divide the frontage into four bays, occupied by two bow-fronted windows, the shop door and house door. The windows have architraves and triglyphs along the top, and stallboard gratings below. A rococo cartouche flanked by palm branches is fixed above the shop door. 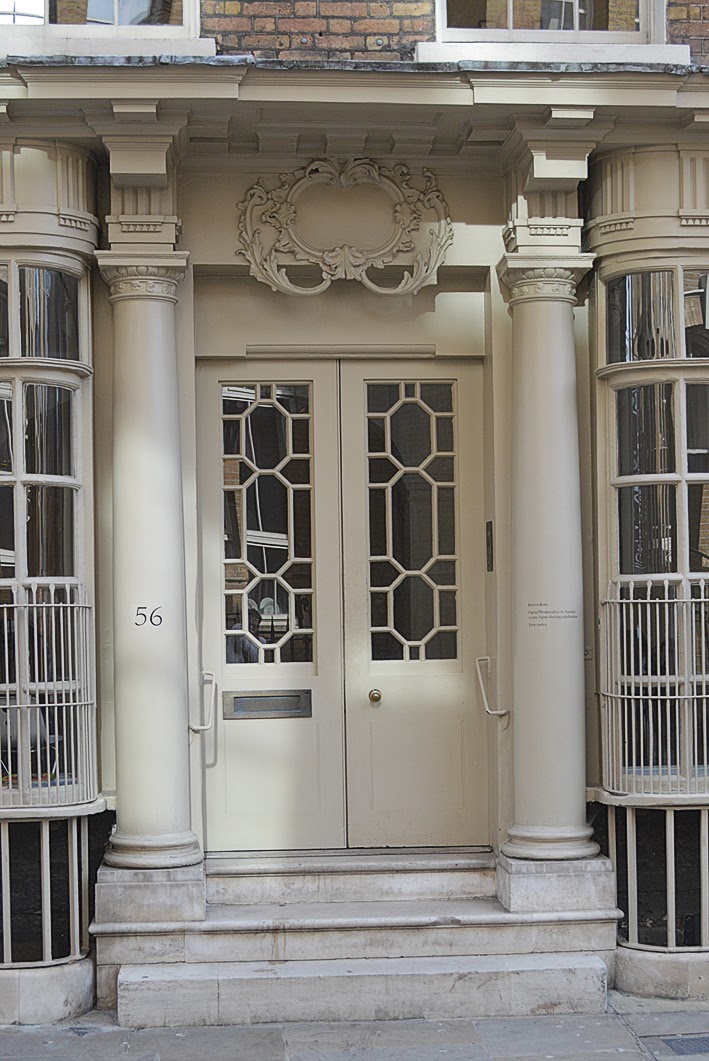 Classical design is big on symmetry, but as is usually the case with shop fronts their efforts are compromised by the need for a door leading to upstairs accommodation. However, the moulding above the house door is even more spectacular than the cartouche above the shop, in my opinion, with drapery hung around an Aurora mask surrounded by rays and scrolls below. 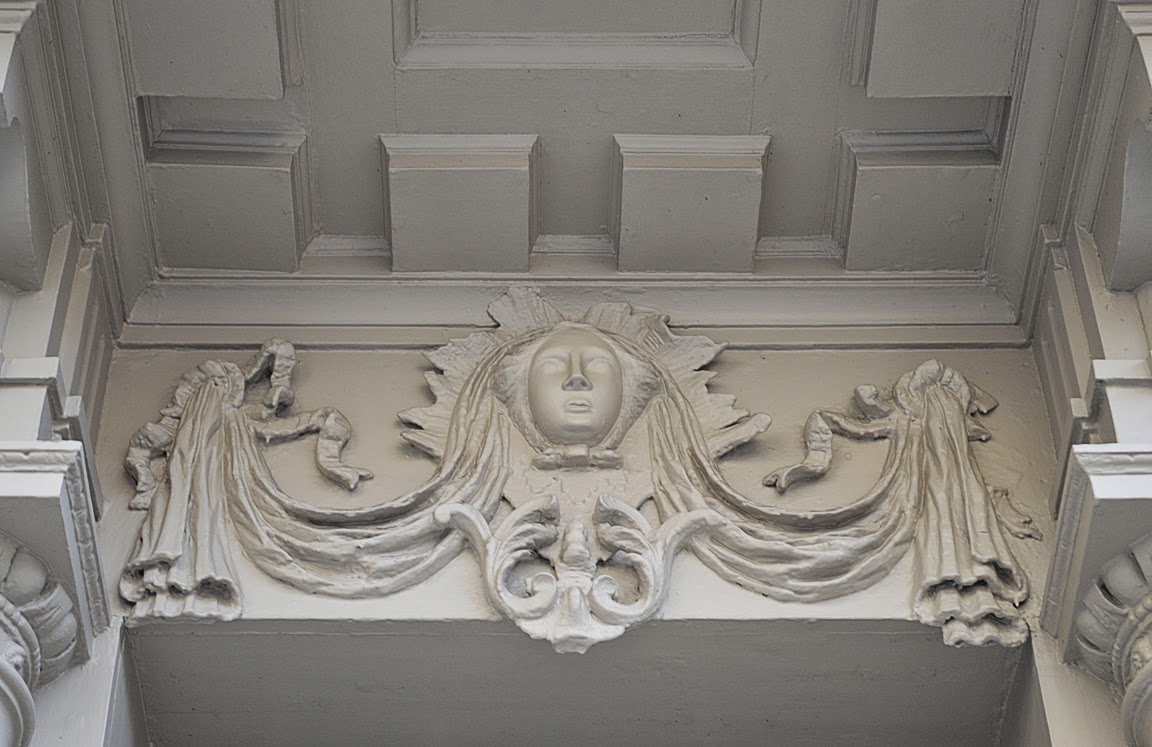 Before 1895 the street was called Raven Row, and 56 and 58 were numbers 3 and 4. Originally a mercer's shop run by Francis Rybot, 56 remained in the Rybot family until around 1782, by when Thomas Blinkhorn, a silk weaver, was here. Blinkhorn stayed till 1799. Grocer Edward Jones moved in around 1813, staying till 1858. In 1859 it was occupied by another grocer, Cornelius Barham, and remained a grocer's until 1935. After that the building went into a decline, although at one point was an insurance office. 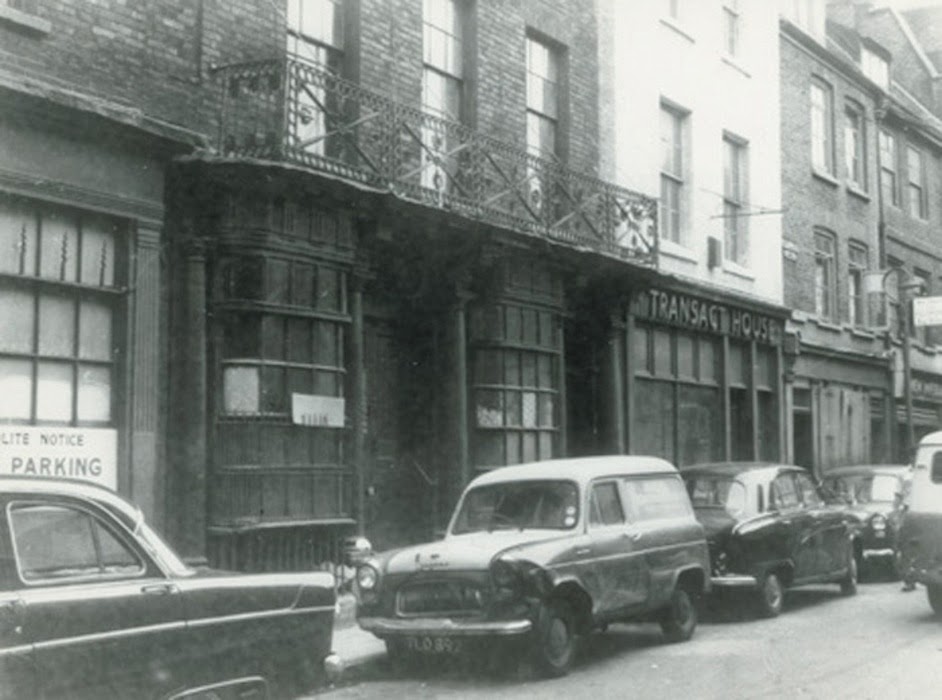 Number 58's original occupier Nicholas Jourdain left around 1772, when it was taken over by grocer and tea dealer Andrew Fowler. The area's dominant silk trade soon returned to the shop though, as from 1817 to 1836 silk and satin dressers Perry & Co (or Perry & Archer) were here. Following the collapse of the Spitalfields silk trade around the 1830s it became a glass warehouse until 1857, then from 1858 to 1935 was occupied by cigar maker IS Wilks & Co – although the 1910 Post Office Directory has a sign writer, Joseph Leopold Wolfson, also sharing the building.

The whole building was damaged by a fire caused by paraffin lamps in 1972.

For a comprehensive history of the two buildings up until the early 20th century, see British History Online. 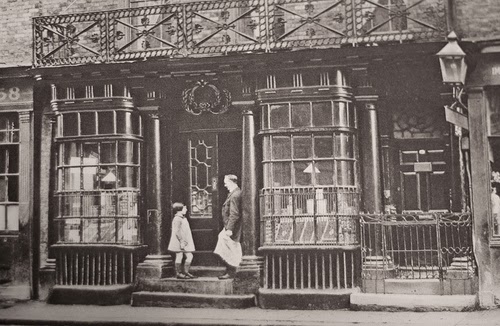 Art collector Robert Sainsbury, using architects Dezeen, restored the building between 2005-09, turning it into a not-for-profit art gallery, named after the street's old name, Raven Row. Here's a picture from inside number 58, taken by David Grandorge (as are the two further down). 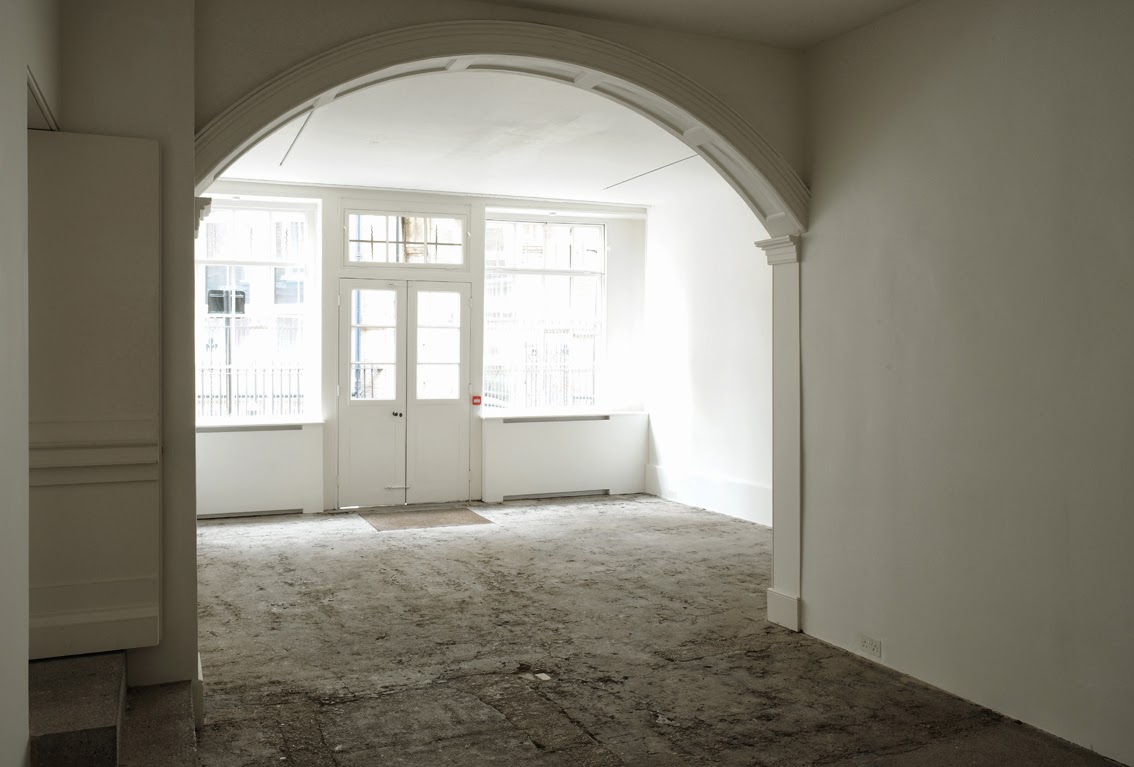 Parts of an 18th-century room from number 58 were shipped to the US in 1927 and stored at the Art Institute of Chicago - they were originally used in an exhibition on English interiors. In the 1980s they came back to England (minus about 25% of it), where they sat in an Essex warehouse for a couple of decades before they were discovered by the architects and reinstalled. The pale stone colour of the exterior paintwork on the restoration is in keeping with that used until the 1870s, after which some dark reds appear to have been used, and then later, following the fire, dark greens. 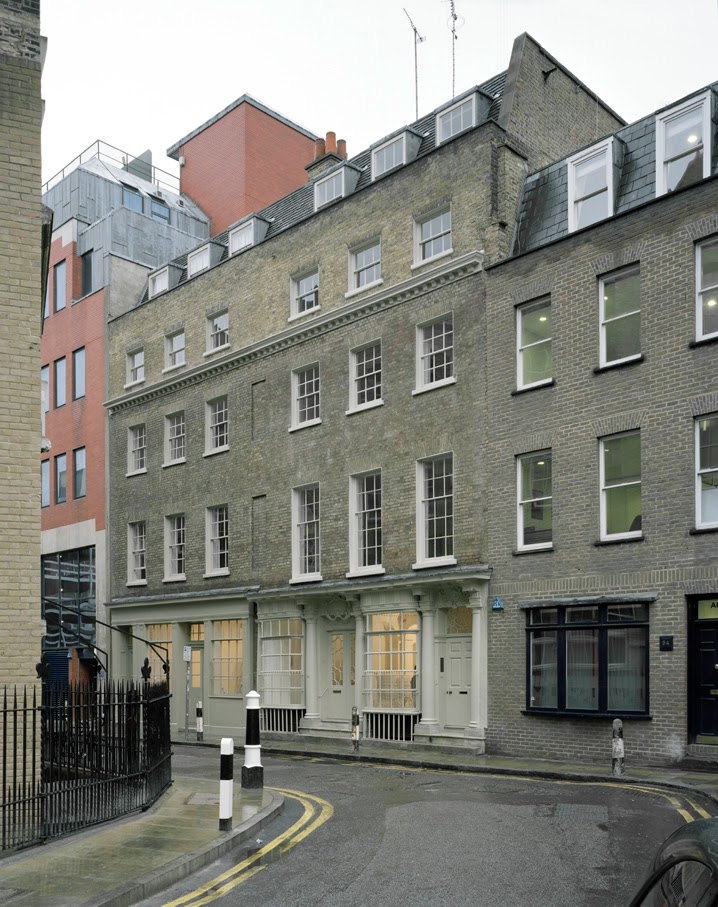