Turning off gridlocked Euston Road, Judd Street doesn't look like it promises much. Between 1808 and 1816, 84 houses were built on the street, but few survive. There aren't any on the eastern side, but on the street's western side a stretch of original buildings erected in 1816 survives, from numbers 85 to 103. Of these, 93 to 101 have shops. 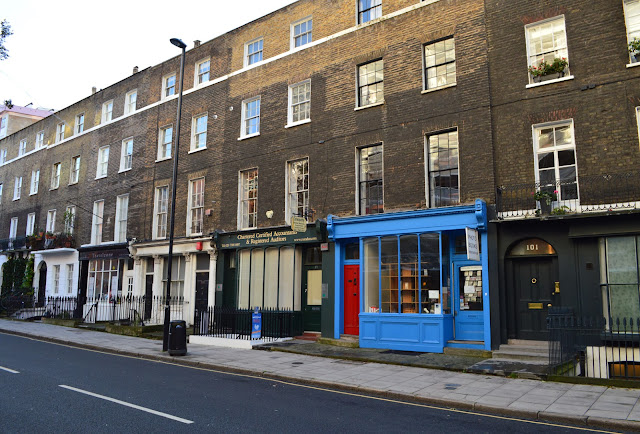 The Grade II-listed block is made from multicoloured stock brick. Here's a pic looking north in 1954, from the Royal Institute of British Architects' picture library: 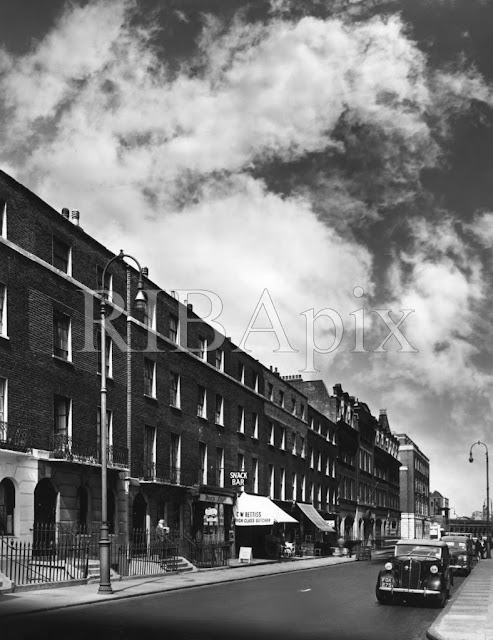 Starting at the southern end, number 93 has an early to mid-19th century shop front with a slightly projecting window with four pretty, arched frames, and one console on the right of the fascia. Consoles, which are used on some of the other shop fronts in the row, are typical of mid-19th century shop design – they first became popular in the 1830s as a new way of marking off separate fascias in rows of shops.

For a random snapshot of number 93's history I looked in the 1898 Post Office Directory, and at that time number 93 was a linen draper run by Maria Barnard. Today it's a travel agency. 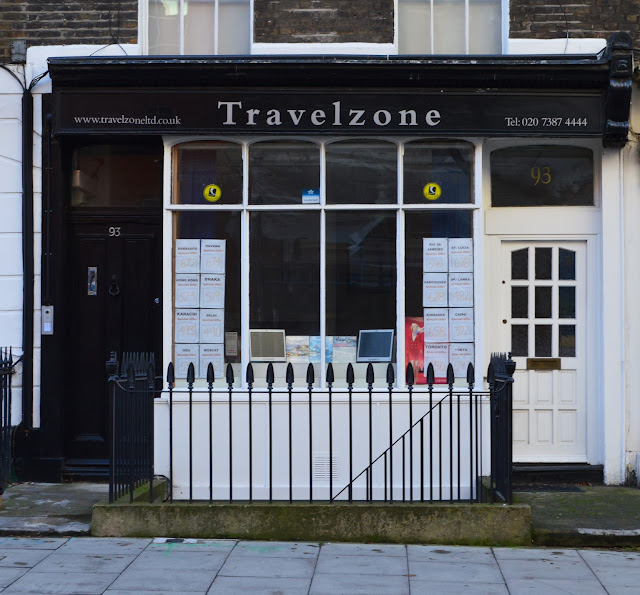 Next door, number 95 has a fine early 19th-century shop front, again in a style synonymous with the period – the Greek Revival, widespread from 1810. The four Corinthian columns support an inswept entablature and a dentil cornice. 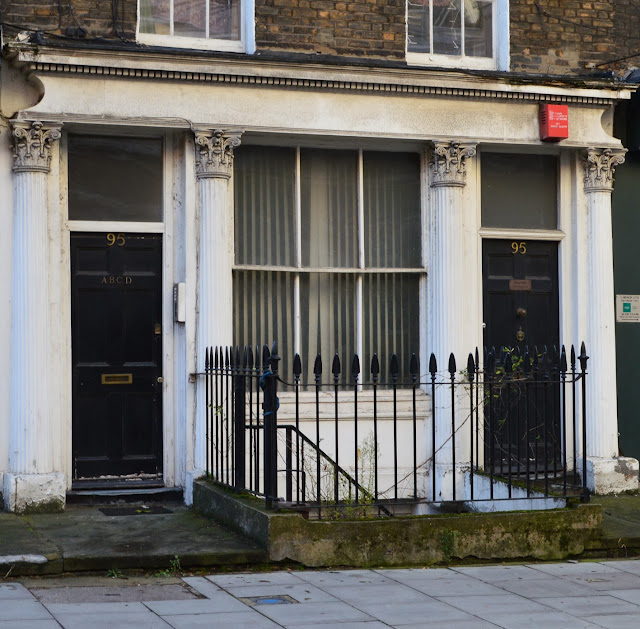 British History Online has what looks to be an original plan for number 95, although it has consoles on either end of the fascia and no inswept entablature.

In 1898, number 95 was a butcher's, William Vardy. In 1950 it was also a butcher, but now under the name E Price. To see a pic of E Price in 1950, click here.  As far as I can tell from the RIBA pic from 1954, it was a butcher's then too, but this time under the name CW Bettiss – lots of chopping and changing in the butchery trade, it seems. At present it looks to be some sort of office, but is definitely the scruffiest shop on the row.

Number 97 looks similar to 93, but the shop front is early 20th-century. There was no listing for 97 in the 1898 Directory, so I'm not sure it was ever a shop before the current shop front was built. 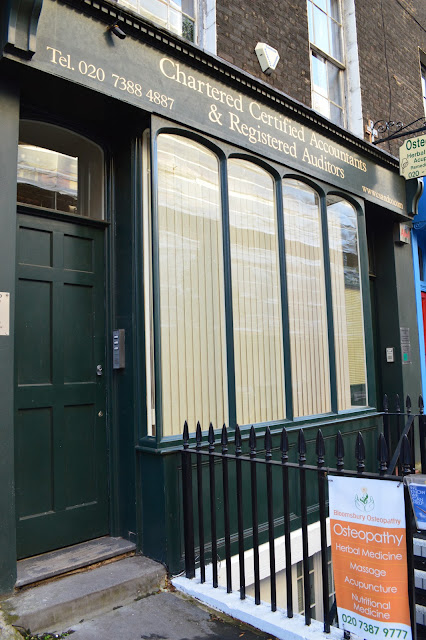 Another 20th-century shop front, albeit a dainty imitation of a mid-19th century one, sits alongside at number 99. Since, I think, 1997 it's been Photo Books International, which specialises in – you guessed it – photography books. However, when I visited it had 'closing down' signs in the windows. Again, there's no listing for this address in the 1898 Directory. 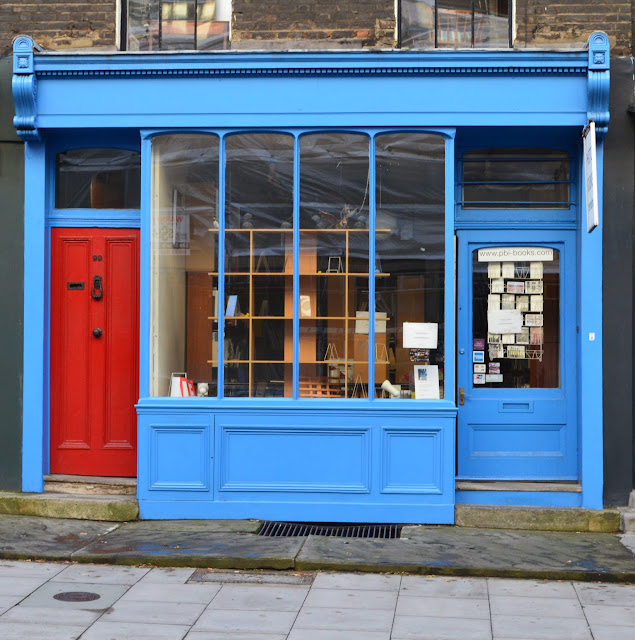 Fortunately there is one more early 19th-century shop front, number 101. It's different to the rest of the row, with two simple, broad flat pilasters, inswept entablature and protruding cornice. The projecting window has pleasingly big panes. In 1898 it was occupied by the London & Provincial Window & House Cleaning Co. Unlike the other shops, it only makes do with one door, rather than two (one for the shop, one for the upstairs accommodation). Today it's split into three residential flats. 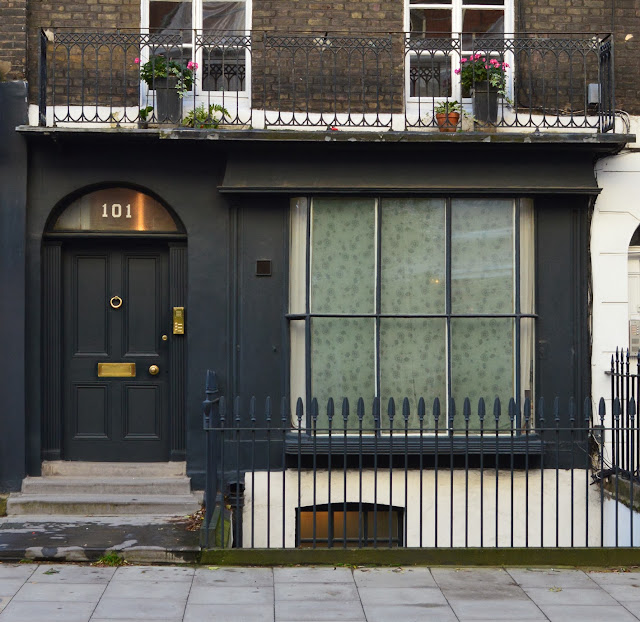