Number 49 Gough Street is a small shop with a big history. Situated behind Gray's Inn Road, it seems to have thrived for a number of years within the furniture industry, particularly as an outpost of larger furniture firms. 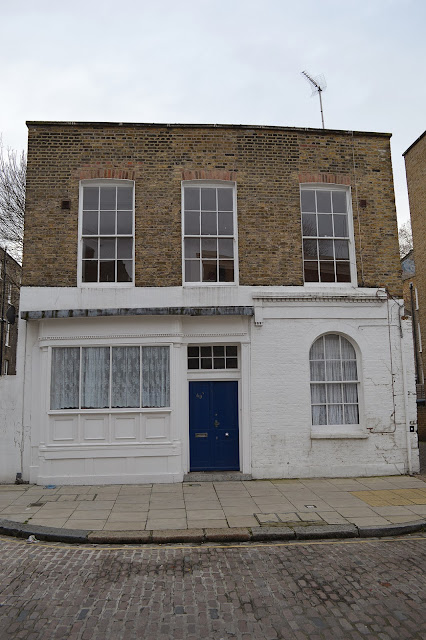 The house and shop, built in the early 19th century, were previously part of a terrace. Although altered at some point, the wooden shop front is original – English Heritage describes it as "exceptionally fine", with its dentil architrave, cornice and entablature atop fluted quarter columns. 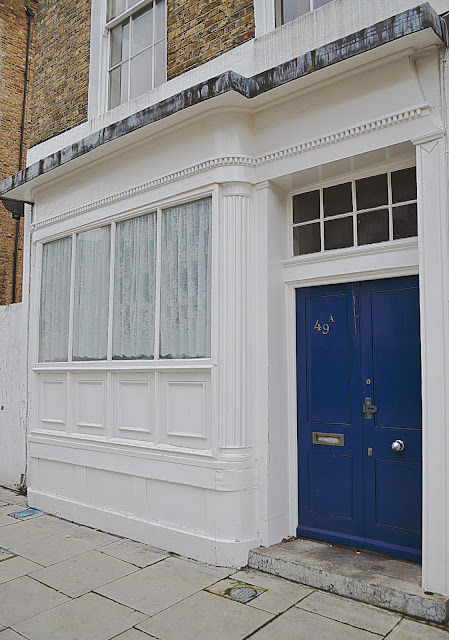 It's no longer a shop. A Google search brings it up as the company address of the director of the British Parking Association, so perhaps it's an office, though there didn't look much happening when I visited on a Tuesday afternoon, and it looks more residential. 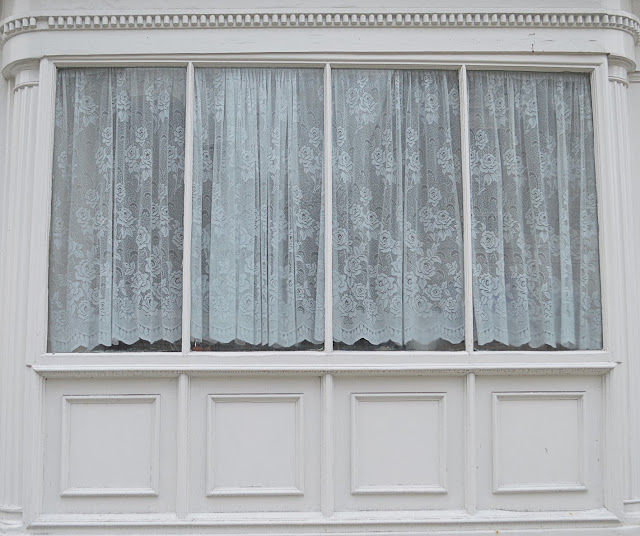 I don't know who the first retail tenant was, but in 1891 it was cabinet maker Baldassare Viscardini & Sons. Born in Como, Italy in 1831, Viscardini was living in the East End by 1841, working with his brother and father – the 1851 census shows all three were looking glass frame makers.

In 1857, Viscardini married 19-year-old Rose Martin, daughter of a carpenter. However, Rose must have met an unfortunate end – in 1867 Viscardini, now a widower, married again, this time to Eliza Sheppard, daughter of a boot maker. The wedding was in Holborn, and then the 1871 census has the family at Mount Pleasant, a stone's throw from Gough Street. In 1881 they're at 54 Gough Street, and by 1891 at 49.

Viscardini seems to have had two addresses at this time, the other being 15 West View in Islington, which must've been the family home. The census listing shows the whole of the family firm:

However, life for Viscardini wasn't just about furniture making. He was clearly a patriotic Italian, as back in 1859 he went back to his homeland to fight alongside general and politician Guiseppe Garibaldi in the Army of the Red Shirts during the Second Italian War of Independence, helping Garibaldi form a united Italy. The Anglo-Italian Family History Society website actually has a picture of Viscardini from his time with the Red Shirts: 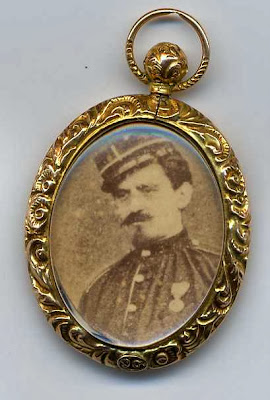 Clearly a remarkable man, Viscardini died in 1896 at West View, and is buried in New Southgate Cemetery. 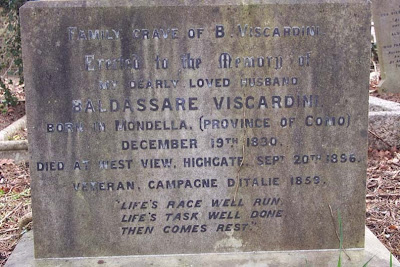 Viscardini's business is still listed as occupying 49 Gough Street in the 1898 Post Office Directory – along with Frederick Nutt, an architectural modeller – but next to move in was possibly E Kahn & Co, listed as an artistic furniture maker in the 1906 directory.

E Kahn was a prestigious French furniture manufacturer, renowned for its copies of 18th-century French furniture, such as this E Kahn commode, which sold at Sotheby's in April 2012 for 37,500 US dollars: 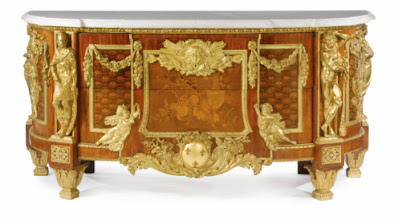 However, there's no suggestion furniture this opulent was made at 49 Gough Street, as this was a smaller branch said to have produced pieces in an English Edwardian style. The company also had premises in St Andrew Street and Charlotte Street (the Shoreditch one) in London, and in about 1884 opened a New York office.

I've no idea what happened to the business, but here's an ad found on Grace's Guide, which lists E Kahn as still at number 49 in 1922 (this ad appeared in the British Industries Fair brochure): 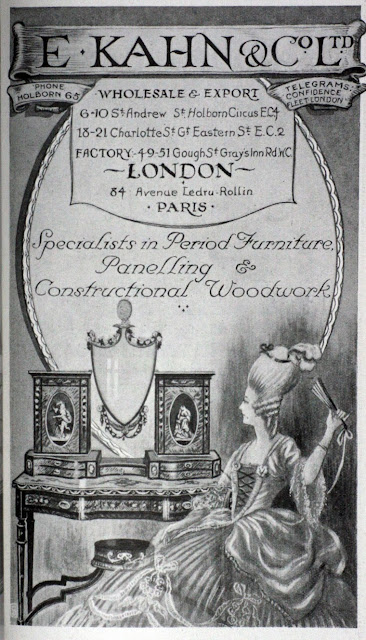 The next Post Office Directory I checked was for 1951, and by this time shopfitters Frederick Sage & Co had installed themselves in number 49. Founded in 1860, the business was based around the corner on Gray's Inn Road until the Blitz in 1941, when its premises were destroyed. Whether it shifted some of its operations to Gough Street after that or was already there before then, this can't have been more than a small limb of a much bigger operation. A picture of the shop in 1947 can be seen here.

It may not look much in that picture, but Frederick Sage was a major shopfitting firm – it was responsible for the original shopfit in Harrods, and for many historic shop fronts on Regent Street, Oxford Street and Bond Street, such as Dickins & Jones, Selfridges and DH Evans on Oxford Street (now House of Fraser). 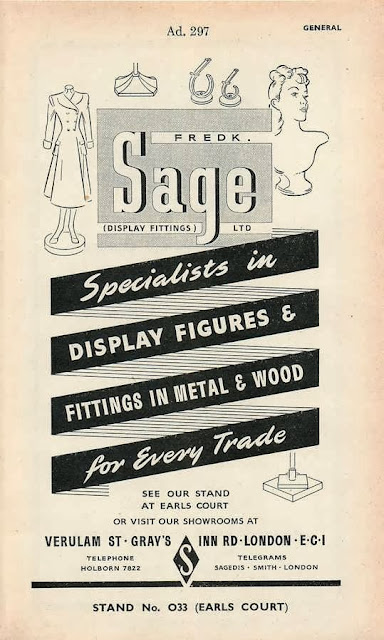 Remarkably, during each World War the company switched to manufacturing wooden airplanes, before picking up where it left off with shopfitting in peace time.

The business was global, with offices throughout Europe – Printemps in Paris was one job – the US and South America, as well as a factory in Cape Town, South Africa. It wasn't just shopfitting either – interiors were constructed for hotels, restaurants, and P&O and Cunard cruise ships. After the Second World War, Frederick Sage worked on the reconstruction of the bombed House of Commons.

The company struggled through the 1960s, and in 1968 was swallowed up by British Electric Traction. No doubt plenty of its work is still around today – in fact, I found these haberdashery shop drawers for sale on eBay... 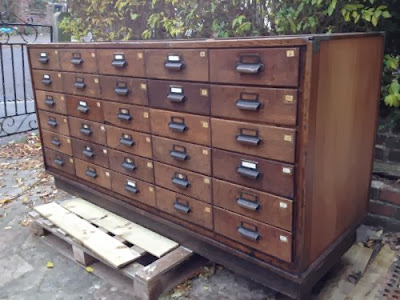 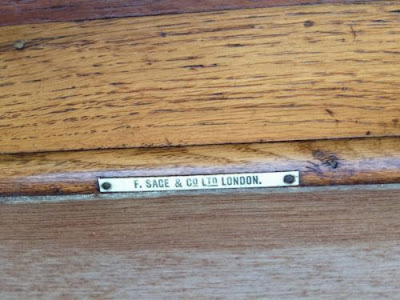